The People and the Building – Page 5

In 1960 the games and races on the field, following the Whit Friday procession, were dropped and a trip to Southport was made instead. By this time new housing estates had been built, Holcombe Brook could hardly be called a village any longer, and so the congregation of the Church was expected to increase, along with a rise in the number of Sunday School scholars. In order to provide more accommodation a pre-fabricated type of building was erected during 1961/1962 at the rear of the Church at a cost of £1000. This was named “The Wesley Hall”, being used for Sunday School classes, meetings and social events.

A new clock was installed in the Church in 1963, presented by David Landamore in memory of his wife, Ellen, who died on April 25th of that year. About this time the pulpit light was also donated by a member in memory of parents. The heating system was boosted in 1965 by the installation of electrical tubular heaters underneath the pews.

At the same time discussions started, continuing for three years, on the future of the Church building – should rooms be added to the existing premises or an entirely new Church be built?

At last, in March 1968, it was decided that extensions should be built and a Building Fund established. Annual Christmas Fairs were held, lasting all day, in the Ramsbottom Youth Centre. Members, particularly those of the Ladies’ Fellowship, worked hard throughout each year in order to have goods ready for sale when the time came. A grant of £6,500 was promised from the Joseph Rank Trust, £1,500 from the Methodist Department of Property, and £4,400 from the Circuit Advance Fund. The remaining £10,600 had to be raised by members of the Church and congregation.

The Wesley Hall was demolished. A large room with a small room at the side was built onto the rear of the Church. The Minister’s Vestry remained in its original position. The other two vestries were replaced by passages leading to a new kitchen and a new lounge with a staircase between these passages to give access to the rooms below. Extra toilets were also installed as part of the new building. In the lower part of the extension there is access to the old cellar, now used as storage space. This new part was officially opened at 3.30 p.m. on Saturday, 25th January, 1975, having cost over £24,000. A short service was held for which the Rev. Ronald Jobling, Chairman of the Bolton and Rochdale District, was invited to preach the sermon. Mr. Rowland Fitton, the Senior Trustee, was invited to perform the ceremony of opening the doors of the new extension. A tea followed and an opportunity was given for everybody to look around the new premises.

Whilst the alterations were being carried out there was a period of time when the Church could not be used satisfactorily and some of the Sunday School met in the Pavilion of Holcombe Brook Sports Club.

In the midst of all this activity the week by week running of the Church was not neglected: in 1969 it was agreed that the morning service of the first Sunday in each month should be a Family Service.

In 1972 the fact had to be faced that the organ could no longer be kept in tune and in repair and a replacement must be sought. Two of our then members, Mr. and Mrs. Parker, had come from Mill Street Independent Methodist Church, Bradford, Manchester, a Church which was closing. Holcombe Brook Methodist Church obtained the organ from Mill Street, paying only for the removal and re-installation which cost £1,000.

The Centenary of Methodism in Holcombe Brook was marked in 1974 by special services on 24th November at 11.00 a.m. and 6.00 p.m. These were conducted by Rev. Alan J. Washbrook, B.A., a missionary from Nigeria and there was special singing by the choir.

By that time the Church members numbered 124, there were 180 adherents, and the Sunday School had 150 scholars.

During the later part of 1973 a Church Fellowship was established meeting once a quarter. However, it was soon felt that a monthly meeting would be more beneficial for continuity. Passages from the Bible or topics with reference to Scripture were discussed. One meeting considered “Freedom”, another time “What is a Miracle?” was debated.

On Boxing Day or the following day in the mid and late ’70s, Christmas parties were given for a large number of Senior Citizens of the Church and surrounding districts. A turkey lunch was served, carols were sung and informal chatting was enjoyed. To enable people to attend, members of the Church used their cars to run a “taxi” service. Any disabled were carried down the steps and into the hall on chairs, being taken out again to cars by the same means.

In recent years members have, from time to time, enjoyed fellowship with each other over a meal served in the lounge after morning service. Sometimes the meal has been given, a charge or collection made, and the money given to a particular fund or charity.

Since 1981 some of our young people have taken part in the Greenbelt enterprise, camping for the August Bank Holiday weekend along with 25,000 – 30,000 people. They have all firmly declared their enjoyment despite returning home with colds and upset tummies!

Greenbelt is a Christian Arts and Music Festival held each year since 1974, usually in the grounds of a Stately Home. Its special emphasis has been on rock music but continues to develop all forms of artistic expression. It is concerned with both expression and communication of the Gospel with the Arts, and with the fostering of excellence in all artistic activity undertaken by Christians. In addition to this it aims to explore the meaning of God’s Kingship through seminars, discussions and worship.

At various times other changes had been taking place: during 1970, after it had been decided to retain the Church on its original site, the heating was changed from the coke-fired boiler to an oil-fired central heating system; the Whitsuntide activities had been varied, not only by an outing replacing the games and races in the field, but also the Walk being moved from Whit Friday to Whit Sunday.

In 1969 an Open Air Service was held instead of a procession; in 1970 the scholars and members met others at St. Andrew’s Church and walked back in procession to their own Church. However, it was decided in 1971 to abandon altogether the Procession of Witness.

At the end of March 1984, a Lay Witness Weekend was held. A team, made up of people from widely-spread parts of the Country, arrived on Friday teatime. A meal was served to them and to members of the Church and congregation, after which the visitors spoke individually of the experiences which had brought them closer to God and strengthened their Faith. Small groups were then formed to discuss questions relevant to the life of a Church, each group being led by one of the visiting team. Every body then came together to hear reports from the groups on the conclusions that had been reached during the discussions. A similar programme was followed on Saturday evening. Coffee mornings with more discussions were held in various homes on Saturday. The Sunday morning service was led by members of the team; they were then given lunch, which concluded the Weekend. The visitors were accommodated in Church members’ homes. After the Sunday Evening service a discussion took place in the Church on what was felt to have been the greatest benefit of the Weekend. 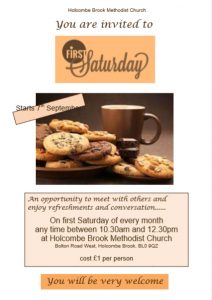